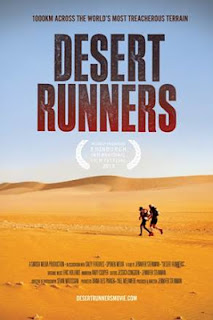 It never fails to amaze me how few of the people who love cinema love documentaries.  Considering how much ‘reality’ TV dominates the television schedule it seems a shame that more people don’t support ‘reality’ cinema.  Maybe that’s the reason though; people are saturated with reality and want Michael Bay endorsed nonsense on the big screen.  Whatever the reason, it is a real shame as I have just finished watching one of my favourite films of the year so far – a documentary about four people undertaking a ‘grand slam’ in desert running.

The film follows Dave (56), Ricky (35), Samantha (25) and Tremaine (40) and others as they undertake four ultra-marathons across four deserts across the world in one year.  They start in the Atacama desert in Chile, the driest desert in the world in which it hasn’t rained in 400 years, then they move on to the Gobi desert in China, which is the windiest desert, then to the Sahara, the hottest, and then finally to Antarctica.  In each of these they run 250km in seven days and have to carry all of their equipment on their backs at all times.  They have checkpoints throughout with medical assistance and water, but they run the majority on their own…  wow.


Steinman’s film is a masterpiece in pacing and storytelling as well as bringing up important questions about ethics and non-fiction filmmaking.  Throughout the film we are witnessing these people enduring the most incredible pain and frustration at their own willing and physical bodies with moments of tears and plenty of casual swearing along the way.  At times the camera is capturing genuine distress as well as elation and often the most heartbreaking moments of disillusion are the most captivating.

My heart broke a number of times as these people realised that they weren’t as capable as they wanted to be, and no amount of fictional acting could have made me feel that emotion more strongly.  At one point Rick tells the camera crew to inform the medic that he has “thrown up around 37 times” and not kept food down in 15 hours.  Later on Tremaine realises that after having hurt his leg whilst at home, he is doing a disservice to his children by continuing to run and must return to England.  My eyes filled with tears on at least three separate occasions at their different struggles.

The film captures episodes of huge tension as racers go missing miles from checkpoints, as well as a harrowing moment when a local man interferes in the race with horrible intentions, which all gives the narrative a sustained poignancy and tension.

As well as the gripping story, the film has stunning visuals due to the beautiful locations and a great post-rock soundtrack to accompany the inspirational reflections of the runners.  I loved this film and can’t wait to see it again on a big screen.